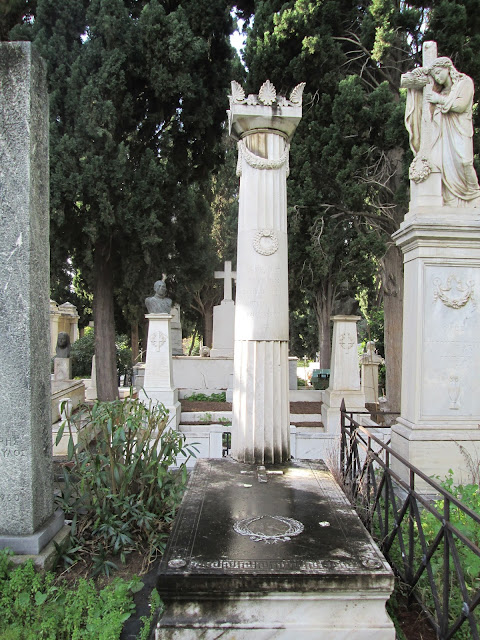 Ioannis Kolettis, a Greek of Vlach(1) extraction, rose from a modest background in a settlement south of Ioannina to first become a doctor at Ali Pasha’s Court, then a freedom fighter and wily politician. He is best remembered today as the man who hounded  Odysseas Androutsos to death and as the man who raised to the level of government policy the “Great Idea”, a political manifesto that would guide Greek history for 80 years and still resonates today

Born and raised in Syrrako in Epirus, Ioannis’s parents were well enough off but he was fortunate to have a wealthy uncle who could finance his medical studies in Pisa. Otherwise, he may have remained in Ioannina as a shopkeeper.  With his medical degree and liberal ideas garnered from his seven years in Italy, he settled in Ioannina in 1813 and eventually became the court doctor of one of Ali Pasha’s sons. At that time, Ali’s court was quite cosmopolitan, with British and French consuls in residence and Greek as the court language.(2)  Ali Pasha was in the process of attempting to carve out what he hoped would be his own future kingdom in what is now Greece and Albania and he was happy to negotiate with European powers in order to achieve that goal. They, in turn, saw him as an important player as the Ottoman Empire declined.  At one point Ali controlled all of what is mainland Greece today and he was a force to be reckoned with: a good ally, but a formidable and cruel enemy.

Kolettis stayed in Ioannina until Ali’s rise was curbed by an exasperated Sultan Mahmud 11 in a power struggle that would result in Ali’s head being offered to the sultan on a silver platter. Ali’s long decline began in 1820 and continued after the outbreak of the Greek revolution until his death in 1822.

In 1821, Kolettis joined the Filiki Etairia and, when the fighting broke out, left Ioannina and dedicated himself to the Greek struggle.

He was not a very experienced soldier. His early military efforts in Roumeli against the Ottomans failed and 1822 found him in Nauplio at the First Greek National Assembly where his efforts as a politician met with more success. He claimed to represent the fighters of Epirus and Roumeli although Odysseas Androutsos also claimed the latter area’s loyalty. As an infighter Kolettis had no match. He was instrumental in the arrest and probably also in the death of his rival Androutsos. He managed to keep his balance during the worst of the Greek civil war of 1824 although he did not always support the same faction.

When Kapodistria arrived in Greece in 1828, Kolettis was made governor of Samos(3), a north Aegean Island that had repulsed the Ottomans. When Samos was reabsorbed into the Ottoman sphere, Kolettis returned to the mainland and in 1831 became Minister of Defense.  During the regency of King Othon he was Minister of the Navy and Defense; in 1835 did a stint as the Greek ambassador to France, only to return to Greece in 1843 when the king was forced to create a constitution. He took part in the subsequent Constitutional Assembly. Under the banner of the French Party, Kolettis was twice prime Minister. 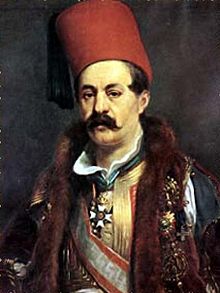 If that were all, Kolettis may have simply gone down in history as a far better politician than military leader and as a man who somehow (some say by astute skullduggery) managed to either destroy or best his enemies along the way. But there is more.

He was Kolettis who raised the Megali Idea (the Great Idea) to overt government policy. This policy would dominate Greek foreign policy for the next 80 years.

The Great Idea, - to reunite all Greek speakers in an expanded Greece that more or less resembled the Byzantine Empire was not new. It was deeply embedded in the Greek psyche since the Fall of Constantinople in 1453. It had strong religious overtones: freeing the Christian Greeks from the Muslim Ottomans – a crusade in fact. The idea was to incorporate all Greeks into the kingdom and/or, at the same time, expand the kingdom to incorporate the Greeks.
Kolettis expressed this idea eloquently at the National Assembly in January 1844:

The kingdom of Greece is not Greece; it is merely a part, the smallest, poorest part of Greece. The Greek is not only he who inhabits the kingdom, but also he who inhabits Ioannina or Salonika or Serres or Adrianopolis or Constantinople or Trebizond or Crete or Samos or any other region belonging to Greek history or the Greek race…
There are two great centers of Hellenism. Athens is the capital of the kingdom. Constantinople is the great capital. The City, the dream and hope of all Greeks”

This was a natural aspiration of the new state, particularly at a time when borders in the Balkans (and elsewhere in Europe!) were elastic and altering rapidly.

In 1864, as a reflection of Kolettis’ idea, King George 1 was given the title King of the Hellenes, not just king of Greece which had been King Othon’s title. After many initial successes, The Great Idea met with disaster in Smyrna in 1922(4).

In some ways, the Megali Idea has made the Greek concept of Hellenism (Ελληνισμός) narrower than is convenient in the twenty first century, especially in the context of the European Union.  It is more backward than forward looking and has offered demagogues countless opportunities to channel public thinking into the narrows of nationalistic jingoism. Kolettis’ reference to a Greek race has often been misused, most recently by the Golden Dawn party.

There is even an organization (www.byzantiumnovum.org) whose goal is nothing less than a return to the Byzantine Empire.

Kolettis’ grave is just west of the Agios Lazarus Church in  Section 2, Number 30A 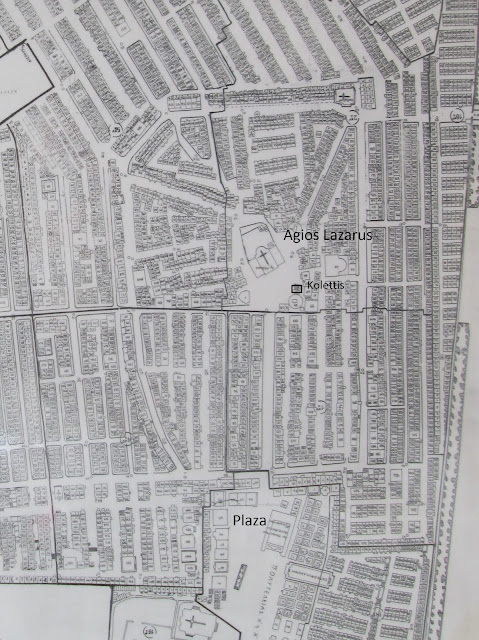 Footnotes
(1) Vlachs:   a term for a varied group of people speaking a derivative of Latin whose origins are somewhat unclear. Populations existed (and exist) in Greece, Hungary, Ukraine, Serbia, and Croatia. Some have assimilated into local populations; some have not.
(2) Ali Pasha is a fascinating character: ruthless and cruel and yet imbued to some extent with the modern ideas of his era. He seems to have been religiously neutral, at least in his policies, and therefore many Greeks had the opportunity to thrive economically and to be educated under his erratic rule.
(3) Samos is an example of the tremendous local efforts of Greece to throw off the Ottoman yoke, only to be frustrated as their territory was reabsorbed into the Ottoman Empire. Of course, their efforts along with so many areas that had Greek populations desiring freedom fueled the Megali Idea.
(4)  A Map showing Greek expansion (and hoped for expansion) after 1832.